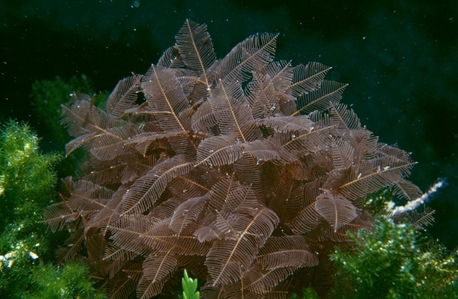 Genus level detail.
Definition as for the family, gonothecae in rows along stem and branches, enclosed in a corbula armed with nematothecae.

Colony of individual polyps (hydranths) joined by root-like network of tubular stolons at the base. Colony shape is tree-like or bushy (arborescent). Colour: charcoal grey to almost black, corbula black, gonothecae cream to black. Up to 20 cm high.

This is one of the most spectacular and graceful hydroids in southern Australia. Their colonies grow most of year, and they are fertile in autumn and winter.